Can't find what you're looking for? For bespoke products, custom print or bulk discounts
Contact Us
All our products are hand picked for quality and tested for purpose. Our products perform and last. 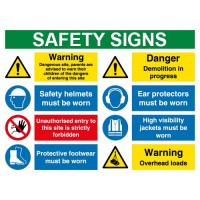 In response to customer needs and queries, Campbell International has prepared these headlines about the development of fire safety regulation and the related standards for signage in the UK. UK Fire Safety Regulation (as applied to non-residential premises) The complexity caused by approximately seventy pieces of older legislation, of which safety signage regulation was just one part, was rationalised in the UK from 2005 onwards by: • The Regulatory Reform (Fire Safety) Order 2005 England and Wales • The Fire Safety (Scotland) Regulations 2006 • Fire Safety Regulations (Northern Ireland) - introduced in 2010

At the time of the above regulation, standards on safety signage were covered by: • BS 5499: For many years, this was the “go to” regulation for safety signage in the UK, including signs for fire safety. • EEC Safety Signs Directive 92/58/EEC: This was the equivalent but separate EU legislation • Health and Safety (Signs & Signals) Regulations 1996 Part 3: Referred to as “The Regulations”, they formed the UK’s own implementation of the above EEC (as was) directive.


“The Regulations” required all employers to describe how pipes conveying dangerous or hazardous substances should be identified. Pipes are to carry the relevant danger symbol and the name of the hazardous or dangerous substance being conveyed.


In general, the UK’s BS 5499 was fully compatible with “The Regulations” but the hotly debated confusion about their two different fire exit signs meant that these standards continued to live in parallel for some years. Only the later UK adoption of the harmonised BS EN ISO 7010 from 2013 (see below) meant that BS 5499 was finally redundant and the dispute over exit signage was at an end.

Today, EN ISO 7010 is the international standard for consistent safety sign regulation across Europe. Its EN form was adopted in 2013 by the UK as BS EN ISO 7010. “ISO 7010:2011 prescribes safety signs for the purposes of accident prevention, fire protection, health hazard information and emergency evacuation. The shape and colour of each safety sign are according to ISO 3864-1 and the design of the graphical symbols is according to ISO 3864-3.” From: The International Organisation for Standardisation (http://www.iso.org/iso/home.html)

Today, Campbells are here, ready to assist with all your compliance requirements in respect of safety signage.


Contact Us now for a copy of our safety signs catalogue!

There are no products to list in this category.